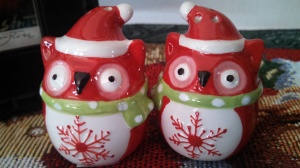 “People don’t know the meaning of the holiday anymore,” declared a woman who sounded very much like she hails from the place my mother fondly and proudly called the Armpit of the Nation, the state where we all were born and raised: New Jersey.

I was browsing the wares of a wonderful little gift shop, feeling mostly buoyant about the start of the Christmas season.

Ms. Jersey was shopping for a Christmas ornament to bring to a holiday party. The saleslady cheerfully pointed out every ornament in the store: a cupcake with feet and rosy cheeks, birds of all feather, snowmen, snowladies, angels, stars, dogs, cats, spheres, trees, Santas, a carrot shaped like a bunny, and even a shoe-shaped elf with a classy wedge. I peeked at them myself, and noticed that the Christmas ornaments hung over a jewelry case full of exquisite pendants: the Star of David, Hebrew letters, dreidels, scrolls, and Trees of Life.  One case over held a dozen or more necklaces bearing brightly adorned crosses.

I made my way around the store and as much as I didn’t want to listen to their conversation, I had to. It was loud.

“People have lost the meaning of Christmas,” the woman said again. The saleslady hmmed in agreement.

“There are families I know who still give everyone in the family a present. Everyone! Who can afford that? They make it all about giving each other gifts. That’s not the meaning of Christmas!”

I started feeling dizzy. In my family, we give each other gifts. I love finding something that will excite my sister or charm my father or thrill my nephews and niece.  It’s so much fun playing Santa for my seven year old nephew who still believes or wants to believe in Santa. What’s wrong with that?

“In my family, we each draw a name and buy only one small gift for that one person.”

The saleslady agreed again. “Yeah, we do that, too. It’s too much buying for everyone.” She then pointed to a flock of quirky bird ornaments. “These are fifteen to twenty each, and really unique.”

“That’s too much. It’s just my girlfriends getting together and swapping presents. We don’t get caught up in the commercialization of the holiday. We meet at someone’s house, drink a lot of wine and do a grab bag gift exchange. It’s not important.”

The saleslady pointed out some vegetable people dressed in holiday garb. “These are darling and they’re only six to ten dollars.”

“That’s more my speed!” She chose a cabbage with a tiara.

At the register, the shopper plunked down her overnight duffel of a purse. “And this shopping before Thanksgiving. Who does that? Thanksgiving is all about family and getting together with people you love, eating and drinking too much. Wait ’til after Thanksgiving at least to start your shopping.”

I looked at my phone just to check the date because I suddenly feared my dizziness meant I’d fallen into a time warp. Nope. It still was five o’clock and it still was the day before Thanksgiving. My sister and I were at a verdant outdoor shopping mall, carrying on an old family  tradition: kicking off Christmas shopping on Thanksgiving Eve.

It still was five o’clock on Thanksgiving Eve for Ms. Jersey, too. Who shops Christmas gifts before Thanksgiving? My sister and I do….and so does Ms. Jersey, apparently breaking her own rule.

For years, my sister and I had so much fun shopping with my mother on Thanksgiving Eve. We’d take advantage of the Black Friday sales before Black Friday, providing a dress rehearsal of sorts for sales associates. No crowds, no shoving or jostling (well, except from and of my sister). Everything was in stock and available for immediate purchase, so we’d immediately purchase at least half of what would appear under the big family Christmas tree on Christmas morning. We were relaxed and happy and we expressed our love by finding great things that would make each other smile and feel loved.

It was a fun family tradition for years. During the happier times, my mother would take only a few breaks during our pre-Turkey shopping excursions. She was too interested in the sales and in the joking around to need soothing from a smoke, much to our relief. As the years went by, however, the smoke breaks became more frequent, Mom became depressed, less able to find or even believe in joy. Her cigarettes, she said, were the only thing she could count on for comfort and pleasure: everyone and everything else let her down.

I treasure the memory of those good years, the years when she still could leave the house, when she still was happy, when she wasn’t burning from the inside out. I also cringe when I remember how for the last few years of her life my mother sounded an awful lot like Ms. Jersey: negative, critical…and miserable. The last times I took my mom shopping were painful, as she loudly blasted everyone for just about everything. It was her way of asserting herself, her way of making herself feel better at others’ expense. It also was at her own expense, as the bitterness suffocated the joy she once had felt about the holidays.

I admit, I was guilty of the same game: making myself feel better by pointing out how others had chosen the wrong clothes for their body type, how they couldn’t drive the SUV they were trying to shove into a glove box of a parking space, or how sloppy people were when it came to sticking their chewed gum on the side of the chair at the snack bar.

My mother was hospitalized days before Christmas in 2011 and died of end stage emphysema and cancer just three weeks later. She died with a lot of regrets, not the least of which was the way she let bitterness and fear steal the sun from her sky.

It’s one thing to have tightly held beliefs. It’s another thing to proclaim them loudly and publicly, not caring who might hear you or how those beliefs might puncture a stranger. Standing in that gift shop, surrounded by beautiful and quirky things my mother would have loved, imagining my mother shopping there with me during a time when she still delighted in giving gifts rather than poisoned opinions, I felt the air whoosh out of my lungs. I felt tears sting my eyes so I blinked hard to hold them back.

I walked up to the lady and said, “You  may think you know everything about the right and wrong way to celebrate a holiday, but let me tell you, judgment is not a gift worth giving and superiority like yours leaves a worse taste on the tongue than fruitcake, although I will admit your opinion is just as nutty as the cake. My mother loved shopping on Thanksgiving Eve until she got sick. You know, you sound an awful lot like she did in her last years of life: bitter, resentful and judgmental. She died at Christmas, regretting her bitterness and the way she threw around her opinions, not caring who heard her or how much those words might hurt people.  It was too late for her; I wonder about you.”

In my head. All of this happened in my head. In reality, I stood on the opposite side of the store, a pair of Christmas owl salt-and-pepper shakers clutched in my hand, and I whispered, “God help me.” So, God squeezed my lungs, leaving me too breathless to move, much less utter a word.

I looked down at the little owls, God’s little messengers, and in that moment I gained new clarity. As long as we are alive, it’s never wrong to be kind. Unlike an ugly sweater, an ugly comment can’t be taken back. You can try to exchange it for an apology, but the apology too often is too little too late, ill-fitting and costly. Even without intending to hurt others, we hurt others by making blanket proclamations and judgments about the way things ought to be, the way people ought to behave. When such statements are directed at us, responding to the unkindness with our own defensive unkindness only hurts us in the long run, no matter how satisfying it feels in the moment. It degrades the spirit to propagate misery instead of cultivating joy and love.

As soon as Ms. Jersey left the store, I crept up to the checkout and wordlessly put the owls on the counter.  I smiled at the saleslady and nodded my head when she asked if I’d like a box. Even though the negativity felt crushing, I felt enlightened, lighter.

I paid for my owls and left the store, but not before wishing the saleslady a very Happy Thanksgiving and much generous joy.  It was the wise and kind thing to do.