Since the untimely demise of the local gluten free food emporium, Return to Eden, I’ve depended on Publix to make my gluten free food shopping a pleasure. Publix has stepped up to the plate, expanding the roster of gluten free (GF) brands it carries and mainstreaming them with their gluten laden (GL) counterparts. I no longer have to go the little GF section at the back of the store, although it’s still there. I can sashay up and down the aisles and find Pamela’s GF baked goods mixes beside Betty Crocker’s GF and GL mixes. On the next aisle, I can stock up on Barilla GF pasta, although I could grab DeBoles below it, and a jar or three of Classico or Organicville pasta sauces a few steps away. Udi’s and Rudi’s GF baked goods are sandwiched between the Tombstone pizzas and Lean Cuisine entrees in the frozen food cases. This expansion isn’t because R2E went under; it has more to do with growing demand for GF fare plus increasing competition among retailers to meet that demand.

Yes, I could go to Whole Foods, but I don’t make the kind of money I used to make. Whole Foods only halfheartedly competes on price, it seems. Instead, it offers oodles of ambiance and the cache of being lucky enough to snag a parking space so you can fork over ten bucks to grab lunch (upwards of twenty for dinner) at the hot food bar. The nickname Whole Paycheck now applies and I just can’t afford it. It’s a shame; I always loved their produce and fresh seafood, which I know won’t poison me with mercury or cadmium like bargain brands might, according to a leading consumer watch magazine. My solution is to eat less seafood.

suburban shopping centers in the last six months and they’ve been advertising heavily: I get at least two circulars a week. Several GF friends have gushed about Sprouts, telling me it’s the next best thing since, well, GF sliced bread.

We made our first pilgrimage to the Peachtree Corners store the Sunday before Christmas. The store’s earthy vibe comes as much from being plunked in the middle of the woods alongside a busy five lane state road as from rustic, woody fixtures showcasing volumes of comestibles in a barn-large space.

Sprouts aggressively prices its products, but it’s no guaranteed price leader. Sprouts sometimes is cheaper, sometimes more expensive and often comparable to those of major grocery chains. If Trader Joe’s carries it, Trader Joe’s beats everyone: Envirokids cereals are $2.99 at TJs, $4.99 at Sprouts, and $5.25+ everywhere else.Applegate Farms roasted turkey breast lunch meat is $5.29 at Sprouts and Publix, $4.99 at Target, and $3.99 at Trader Joe’s.

Where Sprouts outshines the competition is when items go on sale. Daiya Cheese Alternative Shreds are $4.99  at Publix and Whole Foods but Sprouts puts them on sale at $2.99. Stock up! Produce is competitively priced and sales again are the name of the game. We snagged a fresh pineapple for 98 cents just before Christmas and Florida green beans for 98 cents a pound. Both were incredibly, freshly yummy.

I was thrilled to see Silk’s creamy soy yogurt in the refrigerator section, alongside So Delicious Coconut Milk Yogurt (which tastes like a piña colada even if the label says key lime pie or amaretto), Soy & Co. soy yogurt, and several lines of cow’s milk yogurts. Silk soy yogurt was my mother’s favorite. She enjoyed a cool cup of peach or black cherry soy yogurt once or twice a day, every day for the last two years of her life. Right after she died, Silk reformulated the product and everyone—Kroger, Publix, Whole Foods, and even R2E—dropped it. No, I don’t think it had anything to do with my mother, though my mother would have loved the coincidence. She liked being influential (smile).

Now that I have a new Silk source, I’m stocking up for dad, who loves this ultra creamy, not beany, fruity flavored cup of comfort. It reminds him of mom and that’s a good connection to maintain: it’s been three years since she succumbed to cancer and end-stage emphysema. Mom would approve; she liked being influential. It’s on sale this week for 99 cents, a big drop from the regular $1.69 a cup, so I’m going to get all I can.

An equally exciting find was Imagine Natural Creations’ Roasted Turkey Gravy. Whole Foods used to carry it during the holidays and Return to Eden carried it year-round until about the same time as Silk yogurt went away. It’s been impossible to find another GF, dairy free, ready-made gravy. It has a fresh roasted turkey flavor and a smooth texture that works as well on mashed potatoes as it does on rice or on GF pasta. The easy pour, recloseable tab-top carton lets you pour as much as you need for that meal and then store the rest. At $2.99 a carton, it is more expensive than Heinz gravy (not GF) in a jar, but much better tasting and much better for you. I lived on Imagine’s Turkey gravy over instant mashed potatoes when I had GI surgery and couldn’t eat anything but mushy foods for six weeks, so it’s special to me.

On our first Sprouts outing, I jammed six cartons of gravy in the cart beside a dozen cups of Silk. We also grabbed a loaf of 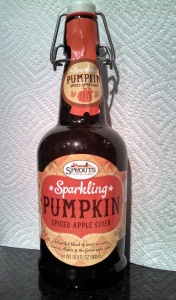 Ooey, Gooey, GF Grilled Cheese: One Daiya chedder flavored “cheese” slice and one slice of Applegate roasted turkey breast deli meat (both trimmed so they don’t spill out the sides) between two slices of Canyon Bakehouse Mountain White bread sandwich with a bit of Annie’s Dijon mustard and some fresh spinach leaves. Spray each side of the sandwich with Pam (or you can brush with butter, if that’s how you roll) and place the sandwich in a preheated nonstick frying pan or into a sandwich press or an electric grilled cheese sandwich maker. Don’t let the pan get too hot or it will smoke and set off the smoke detector (I know this from experience). If using the frying pan method, keep pressing the sandwich with a spatula so it flattens and the cheese melts but doesn’t ooze out the sides. Flip and cook the other side, too, until both sides are golden. Trust me, this is ooey, gooey, gluten free heaven.

It’s a bit of a hike, but I like Sprouts. If you have one near you, check it out!