“Your surgery is set for August 20th at 10:30 am. Please arrive two hours early. Nothing to eat or drink after midnight. You’ll need someone to drive you home the next day. Call Monica for a cost estimate.”

I was riding a bike through the woods of coastal Georgia when the call came. We just had stopped to swig some water and to admire the beautifully dissonant scenery. I’d never before seen woods composed of palmettos and pines, Spanish moss and yaupon holly.

It became real as I stood on a rise overlooking the salt marsh: I’m losing several organs.

We’re not talking your run-of-the-mill organs like the spleen or a kidney or a section of the colon. No, I’m losing the ones that make me a woman, the organs that separate the female from the male and even the women from the girls. I’m losing my ovaries, fallopian tubes, uterus, and cervix.

It’s been a long time coming. The womanly works first worked a month before I turned thirteen in seventh grade. Things seemed normal until I hit high school. Like most girls, I had the occasional opportunity to sit on the bleachers during gym class freshman year, either because the cramps were too bad or because I wasn’t prepared for the monthly visit of the Lady in Red.  Just before my sixteenth birthday the real pain started. For at least two days of every month I’d stumble down the halls in a nauseous haze before hunching over my desk  to ease the pain while I waited for a new dose of Premysn to kick in.

I suffered equally bad bouts of pain and malaise all through college, pain which more than once affected a grade thanks to the confluence of finals and my flow. Another strange ob/gyn diagnosed it as endometriosis. I finally underwent surgery to zap away the scar tissue and endometrial masses when I was twenty-four. Six months of prescription med-induced menopause gave my body blissful relief, relief that extended for ten pain-free years after that because low body weight suppressed my cycle.

When the system returned to monthly cycles in my thirties I didn’t have much pain. A few years later I was diagnosed with celiac disease and started the gluten free diet. I felt much better! Turns out, endometriosis and autoimmune disorders have high co-morbidity, or co-occur.

Things started going haywire again about a year ago. At first I thought I was easing into perimenopause, that twilight time of not-quite normal before Mother Nature shutters the baby-making factory for good. I wasn’t concerned about bleeding when I wasn’t supposed to be bleeding until I realized I was bleeding more often than I wasn’t. I also realized I had much more pain than just a little and more often than just the first few days. Running exacerbated the pain, as did several other activities.

The pap came back negative, meaning no dysplastic or cancerous cells and no HPV. Good news! The endometrial biopsy, which was a shockingly painful procedure, also showed no dysplastic or cancerous cells, but as the doctor reminded me, it’s only a represenative sample. There could be cancer or dysplastic cells or benign fibroids lurking there and we wouldn’t know without a more thorough search. The ultrasound showed a slightly thickened endometrium, while symptoms suggest extensive endometriosis and something wrong with the uterus.

If I was in my thirties, the next step would be a D&C. The extensive pain plus bleeding plus medical history plus risk factors plus concern for cancer multiplied by my age equals radical surgery to remove all the organs and biopsy them, and also to ablate the endometrial masses and scar tissue present. As the doctor said, “This takes care of everything.” 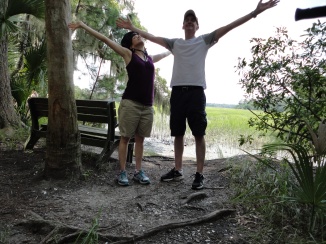 After the call, we stood in the woods at the edge of the salt marsh and marveled at God’s creation. God breathed across the marsh which stirred the black-tipped reeds and cooled our sweat-soaked bodies.The fiddler crabs waved and clacked their fiddle claws as if applauding.

We celebrated having a plan for relieving me of the pain and other symptoms increasingly limiting my enjoyment of life. There’s still a chance they will find cancer during the operation but we’ll deal with that then, not now.

All I can do now is get as fit and healthy as possible so I’ll heal well post-op. I also have to recognize that some things are out of my control, are in the hands of a Higher Power I choose to call God. I surrender my fear on a daily, sometimes hourly basis. Surrendering my reproductive system is much harder.

I’m a work in progress.