The leaves finally began turning, not here, where I have rebuilt my life, but, rather, in the mountains linking North to South Carolina. Here, it’s still summer, with daily temps still well in the 80s. There’s no frost on the pumpkins here, just heavy, heavy dew. The trees look tired, droopy, desperate for a cold snap so they finally can rest, but still green. The dogwoods hint at the potential for turning crimson and some Japanese maples across the street toy with rouge on the tips of their miniature leaves, but it’s green, green, way too green for the middle of October. That’s why I mistook the restlessness for anxiety over the state of my health. That’s why I blamed the nightmares on the state of the nation.

It wasn’t until a walk around Pinnacle Lake in South Carolina’s upstate Table Rock State Park this past weekend that memories of past falls hit full force.

First came the sweet memories of walking around this same lake on our honeymoon nearly two years ago. It was a cold day in early January and my new husband and I basked in the silvery quiet of bare branches and frozen firmament. I usually lamented winter, disliking its bleak days and long nights and discounting its palette of greys and browns and whites. That was before I found David, the man clearly made to be my partner and for whom I was made to be partner. With no one else have I felt so safe, so loved, so cherished, and so blessed as I do with my husband.

On October 17, 1993, I was raped and held captive for five hours, after which I was locked in the mental ward of the nearby hospital for eighteen days because the doctors didn’t believe I had been raped. The pain is less today because I no longer feel damaged, and it’s also more acute because yet another rapist—make that two rapists—are in the news and their victims are the ones defending themselves, not the rapists.

You’d think 24 years would be long enough to change our culture so we wouldn’t still blame the victims, wouldn’t still assume she “asked for it” or “wanted it.” You’d think a quarter of a century would advance us enough to realize no one asks to be assaulted; no one wants to be raped, and no one thrills at being hunted. You’d think enough research has been done, enough reports publicized to ensure everyone knows rapists do what they do for the thrill of dominating and destroying someone, not because they were overcome with passion and desire. Rapists are criminals. Rapists are criminals who believe they have the right to dominate, to coerce, to take whatever and whoever they want whenever they want without repercussions.

You’d think by now we as a nation and as a people would turn our collective disgust toward anyone who brags about grabbing women’s pussies, who brags that with his position of power “you can do anything you want” to women, but no, we elect him president.

You’d think by now we as a nation and as a people would ferret out and cut short the career of anyone who routinely exploited, harassed, and assaulted women, but no, we give that man (those men) awards and tons of money. 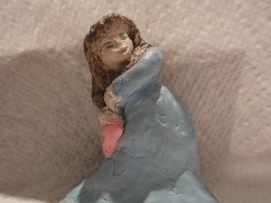 We still treat women like objects and men like the owners of those objects. We expect women to be flattered by any man’s advances and we expect women to secretly want to be dominated and taken advantage of.  If we deem the woman to be beautiful, she was asking for it. If we think the woman is not beautiful, well, then, she couldn’t possibly have been raped or assaulted because what man would want a woman like her? That’s the argument one rapist used and we put him in charge of our nation, made him responsible for our safety and security. That’s insane.

I was wearing a black turtleneck sweater and old jeans when I was raped at the age of 26. I wasn’t built and I wasn’t beautiful. I was small, which made me a great target.

It was a man I knew, someone I’d met for dinner a few times. He seemed off in a way I couldn’t quite describe but I listened to a friend who said I was being too picky and looking for excuses. I said I didn’t want to see him again but she said I should give him one more chance. What a fool she was and what a bigger fool I was. Even so, one person’s foolishness is not license for someone else to perpetrate a crime. We don’t blame people for being mugged–what did you expect carrying money in your wallet?–or  carjacked–if you drive a car like that, you’re asking to have it stolen.

Every year since then, the turning leaves have triggered feelings of helplessness. The changing slant of the sun’s afternoon rays have reminded me every October of the day I ignored my intuition and nearly paid with my life. Every year, the smell of fallen leaves and fall spices cause my heart to race and my lungs to tighten.

There were two perpetrators in my story: the rapist and the psychiatrist who committed me to the mental ward for 18 days. He said, and I still shake my head in amazement, “I don’t think you were attacked. I think things got out of hand and you feel guilty.” This same doctor also said I was too ill to switch doctors when I asked for a new doctor to treat me. He prescribed eight different drugs for me while I was locked up, drugs to sedate me, make me compliant. This same doctor also told me and my parents on the day I finally was discharged, “You’ll never be fully independent again. Maybe a low stress, part-time job and a supported living arrangement would work but that’s in the future.”

I used to think of myself as damaged goods. Not today. Today I don’t think of myself either as goods or as damaged. The damaged one is the perpetrator and there is nothing good in taking someone’s body against her (or his) will.

I am a survivor and I am fed up with our rape culture, our culture that encourages men to behave badly, that tells men they are manly for behaving badly, that scrambles to protect the athlete whose life will be tarnished because some co-ed dared to say out loud to people in charge, “He assaulted me.” I’m sick of sexism dictating our treatment and maltreatment. I’m sick of us choosing money over people, electing and sanctifying amoral bullies who have no damn business walking the streets much less occupying the highest offices of our companies, our societies, and our government.

A real man is not a criminal. A real man doesn’t take; he gives. A real man doesn’t try to protect his coworker or teammate or student when his criminal behavior comes to light. A real man teaches his son that no means no, no matter what. He counsels his son, explaining the sanctity of the human body and guides him in cultivating respect for boundaries and limits and self-restraint.

A real man is my husband: kind, thoughtful, respectful, loving, asking and never taking. He appreciates me as a survivor and he supports me when I speak up as a survivor. He also speaks truth to other men, challenges them on their sexist, predatory behavior.

Ladies, a real woman never blames another woman for being raped or harassed or assaulted. A real woman, like a real man, knows we never “ask for it,” we never “deserve it,” we never “get what’s coming to us” when we are raped, harassed, pressured to trade our bodies for what should be given on merit.

Call it what it is: it’s rape, not passion, not getting carried away. It’s a felony, a violent crime.

And call me a survivor. Twenty-four years is a long time to carry the burden of someone else’s moral bankruptcy. I’m finally done with it.

Oh, and for the record, I blew the hell out of that quack doctor’s prognostication about independence and employability. As my mother used to say, “Someone calling you a chair doesn’t make you a chair. It’s what you call yourself that matters.”

P.S. I made the little figure in the picture. She was part of my art therapy after I was released from the hospital in November 1993.